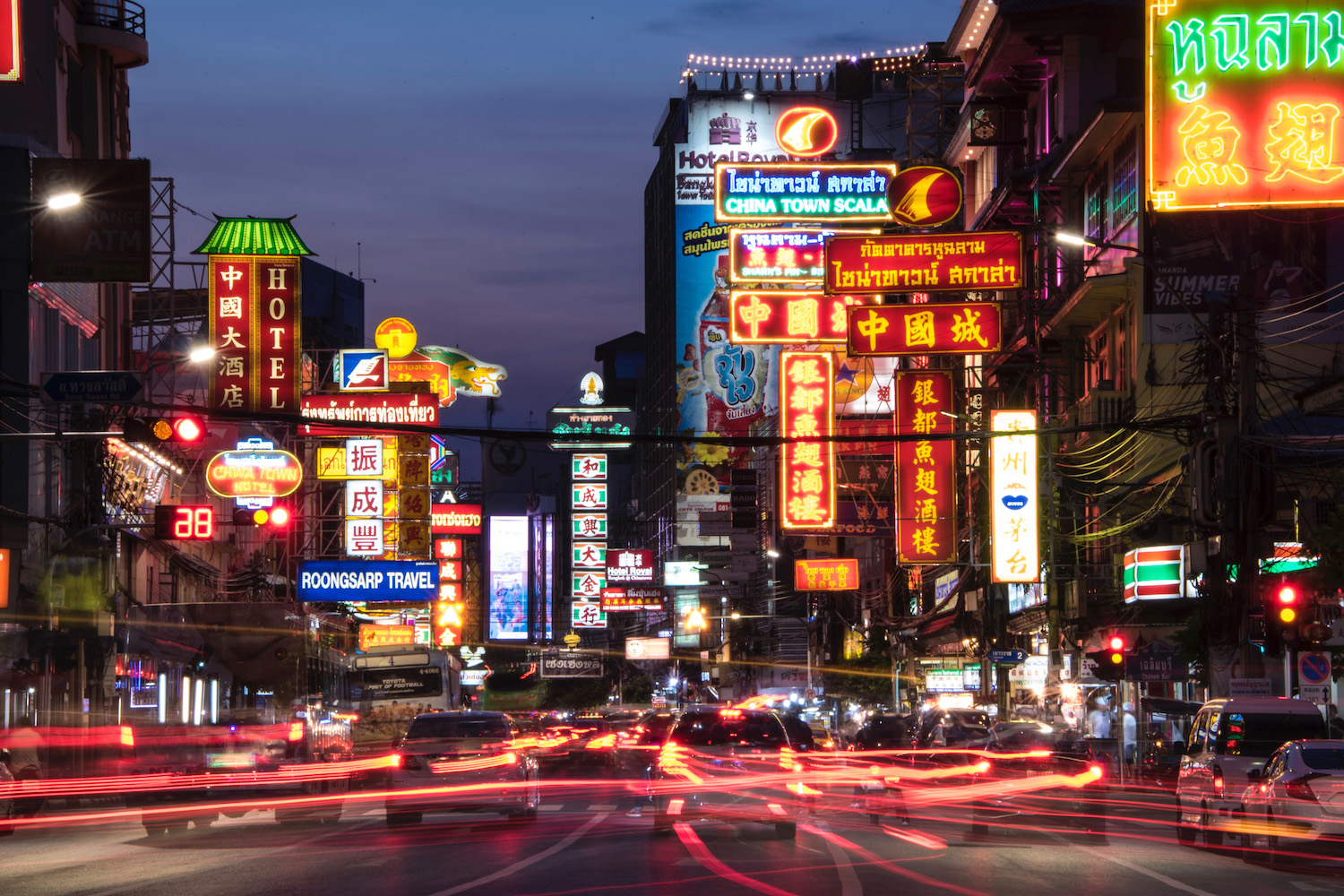 Taxis in Bangkok are one of the things that stress me out most about the Thai capital. I’ve always avoided Bangkok taxis like the plague, all the way back to the early 2010s, when I was a backpack staying at Khao San Road.

In theory, with the introduction of Grab Taxi, Bangkok transportation became a little bit less hellish. This too, however, came with its own set off difficulties and frustrations, which I’ll explain more in a few paragraphs.

Whether you’re curious about Bangkok airport transfer options, or simply want to brace yourself for the nightmare of traveling around Bangkok by car, you’re in the right place.

Need help planning your trip to Thailand? Commission a custom Thailand itinerary!
Contents
1  My History With Bangkok Taxis
2  Most Important Things to Know About Taxis in Bangkok
2.1  Taxis in Bangkok are required by law to use the meter
2.2  Tuk-Tuks are a guaranteed rip-off
2.3  Bangkok taxi drivers can be evil or stupid, but rarely both
2.4  Motorcycle taxis are fast, easy and deadly
2.5  Official taxi stands offer minimal protection
3  No, Grab is Not a Godsend
4  The Sad Truth About Transportation in Bangkok
5  The Bottom Line

My History With Bangkok Taxis

Bangkok taxi drivers have been scamming me almost since the first time I visited Thailand. I vividly remember one ride in August 2010, when I needed to travel from Khao San to Thong Lor, and all but one taxi driver refused my journey outright. The one who ended up taking me not only refused to take me for less than 500 baht, but ended up dropping me off at the wrong place in spite of having ripped me off. Needless to say, I took the SkyTrain back as far as I could; I think I ended up walking the rest of way, fueled by my anger.

I’m jaded but optimistic, and have given Bangkok taxis many opportunities since to prove my cynicism wrong. At every chance, however, they have made me even more resistant to flagging one of them down, except for in the most desperate of circumstances. The good news, if you’re considering a long distance taxi, is that you have much more leverage in negotiating the rate on a Bangkok to Pattaya taxi than you do for journeys wholly within the city limits.

Most Important Things to Know About Taxis in Bangkok

Taxis in Bangkok are required by law to use the meter

Of course, they often reject this legal obligation, which says as much about their character as it does about the importance of the rule of law in Thailand. But I digress. Whether you get a Bangkok airport taxi from one of the kiosks in the basement of Suvarnabhumi, or hail one along Silom or Sukhumvit Roads by day or night, there’s a good chance you’ll be expected to pay a flat fee, particularly if you’re a foreigner and/or can’t speak Thai. (And assuming the driver agrees to take you to your destination at all in the first place—refusal is also technically illegal, but happens all the damn time!)

Tuk-Tuks are a guaranteed rip-off

Many foreigners assume that tuk-tuks are cheaper than taxis—this is almost always wrong. While these kitschy auto rickshaws are indeed an affordable way to travel for local people, especially outside the city center, foreigners seeking tuk-tuk transport almost always pay a premium, often double or triple what even a scam taxi would cost. One example of this would be if you travel from Khao San Road to Yaowarat, aka Chinatown. While a taxi might cost 50-100 baht, with or without a meter, you’ll pay at least 200 for a tuk-tuk—and that’s if you can bargain. Oh well…enjoy the experience, I guess?

Bangkok taxi drivers can be evil or stupid, but rarely both

I can’t tell you how many times I’ve been in a taxi (or another private car—more on Grab and Uber later) from Bangkok airport to city when the driver made a wrong turn. (Which, in Bangkok at any time other than the middle of the night, can be a mistake that extends journey time by an hour or even longer.) The good news is that I’ve rarely found Bangkok taxi drivers to deliberately extend journey times—they have lives too, after all. The unfortunate conclusion to draw from this, of course, is that many of them just aren’t very bright.

When I first moved to Bangkok in early 2017, I lived in Soi Suan Phlu 8, which is around a kilometer from the nearest BTS and MRT stations. Now, I’m not lazy or weak, but I also don’t like to walk around the city as a sweaty mess. A solution that was popular among locals and expats alike water a motorcycle taxi, which takes only a few minutes and cost no more than 30 baht. I did this for about a year, at which point I saw a dead body with a sheet over it on Sathorn Road. I thankfully didn’t know the deceased, but when I learned the cause of death—motorcycle taxi accident—I swore off mo-to-sy for good.

Earlier I reference the taxi kiosks at Suvarnabhumi Airport, which are supposed to ensure that your (licensed) taxi driver users the meter and doesn’t scam you. If I’m fair, I’d say these have about a 50% efficacy rate—and that’s high for Bangkok. “Official” taxi stands in the city, whether at malls like Siam Paragon and CentralWorld or high-end Bangkok hotels, are sadly even less reliable. I’ve not only been refused journeys by these taxis, or had them refuse to use the meter, but have had several try to drop me off on the side of the road, when the traffic was heavier than they anticipated!

No, Grab is Not a Godsend

When Uber exited Thailand (and Southeast Asia as a whole) a few years ago, many of my Southeast Asian friends assured me all the problems that had accompanied the service (i.e. long waiting times for pick-up and incompetent drivers) would vanish. Unfortunately Grab Taxi Thailand proved to be even worse than Uber had been on that front. I often waited 15-20 minutes or longer for my car to arrive, and at least 25% of the time, the driver would get lost—either when coming to get me, or when taking me to destinations in Bangkok that literally everyone knows, even foreigners.

The worse news (which won’t come as a surprise to anyone who’s spent more than a cursory amount of time in Bangkok) is that there is no sign of a superior Bangkok taxi app on the horizon. Now, if you aren’t as Type A as me, or simply aren’t on much of a schedule at all, you’ll probably believe the annoyances of Grab are worth being able to pay with a credit card, and making sure your driver knows your specific Thailand destination. However, if you want to arrive places on time and not have to call your car before you even put your shoes on, Grab might not be for you.

The Sad Truth About Transportation in Bangkok

Within a few months of moving to Bangkok, I made a sobering concession. Less because of the Bangkok taxi fare and entirely due to the stress taxis and Grab cars caused me, I decided that if I couldn’t go somewhere via a combination of rail transport and foot, I probably wasn’t going to go. (The good news, especially as time passes, is that more places are connected by Bangkok’s BTS and MRT systems.) Still, I did miss out on some personal and professional opportunities as a result of this harsh but necessary stance.

Assuming the master plan of Bangkok’s rail system comes to fruition before the city sinks, this might actually one day be a realistic way to live a fulfilling life in Thailand’s City of Angels. For now, however, that fact that it’s the only way to stay sane (at least in my own experience) is a sad referendum on the status quo of transportation in Bangkok: It’s a hot fucking mess, one that’s going to get a lot hotter and messier before it reaches a sustainable point of the amelioration. That’s the tea, and I’m not going to apologize for spilling it!

The bad news? Taxis in Bangkok are a nightmare, even if they’re probably a bit better than they were a decade or more ago, all things considered. The worse news? Although innovations like Uber (and later Grab) seemed to be smart solutions, they actually complicate matters further, and cause travelers and locals alike to set high expectations that can never be met. If you want to navigate around Bangkok without being constantly on edge (and don’t mind walking, sometimes for a kilometer and often amid blazing heat and humidity), do what I do: Limit yourself, with few exceptions, to places reachable by train and on foot.