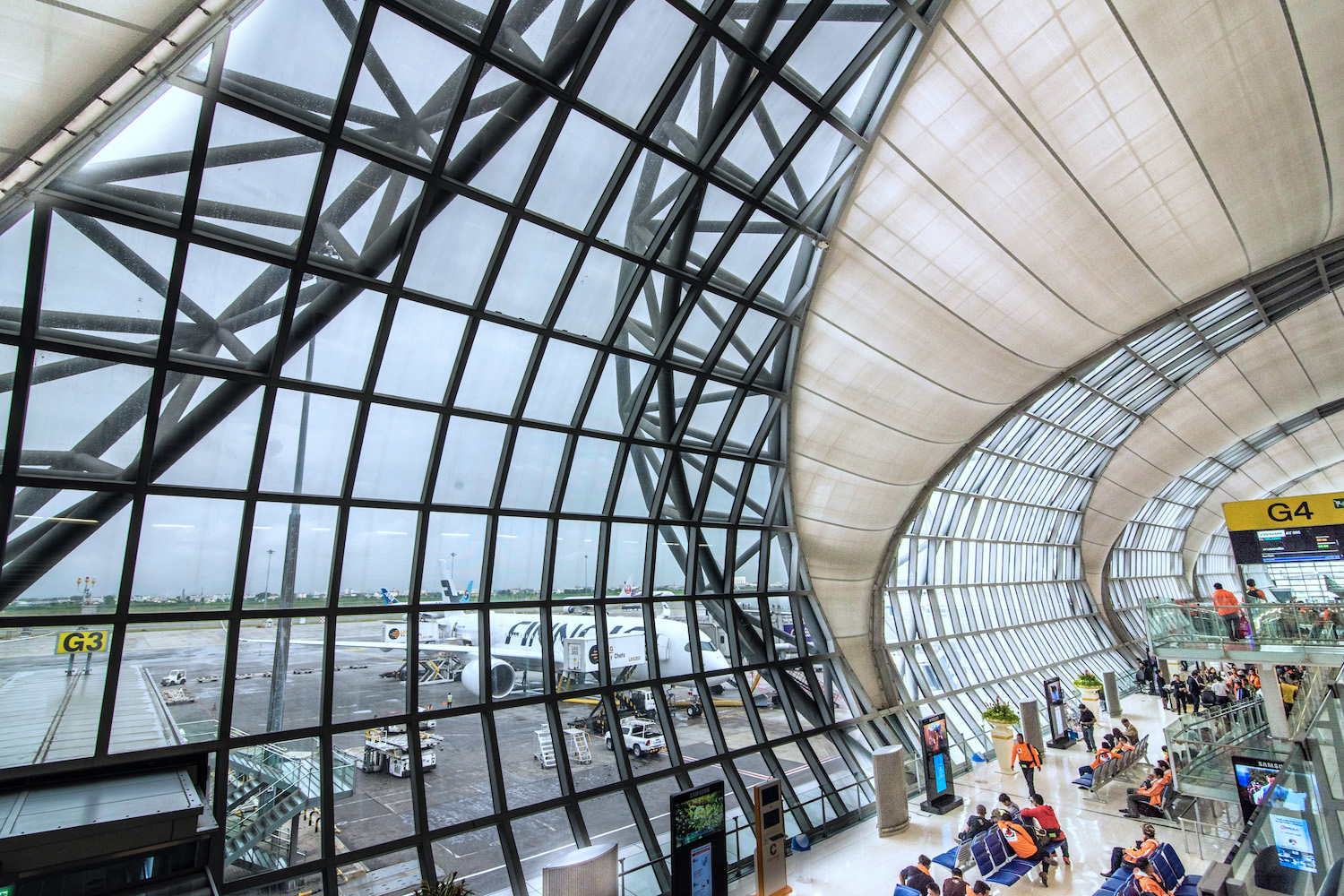 Bangkok has two airports—BKK and DMK are unique facilities in completely different part of towns, separated by dozens of traffic-filled kilometers, which will take you an hour (minimum) to traverse.

Unfortunately, many first-time travelers to Thailand fail to realize this, and turn up at Suvarnabhumi (BKK, where they likely arrived in the Kingdom), only to find out that their flight to Chiang Mai or Phuket is departing from DMK a.k.a. Don Mueang.

Over the next few paragraphs, I’ll help you understand the key differences between Bangkok’s airports, including my subjective assessment about which of them is “better.” (Your mileage may vary.)

Need help planning your trip to Thailand? Commission a custom Thailand itinerary!
Contents
1  Why I Prefer BKK Over DMK
2  Ways to Compare DMK and BKK
2.1  Location
2.2  Amenities
2.3  Airlines
2.4  Connections
2.5  Security and immigration
3  Reasons to Use Don Mueang Airport
4  Other FAQ About Bangkok’s Airports
4.1  Are BKK and DMK the same airport?
4.2  Which airport in Bangkok is better?
4.3  Which Bangkok airport is closer to the city?
5  The Bottom Line

Why I Prefer BKK Over DMK

For me, there’s really not much of a comparison between Suvarnabhumi vs Don Mueang. While BKK has its problems (it’s earned the nickname “Swampy” among many expats, and not just because of the fact that it was built on a former swamp), it is nonetheless a modern, efficient facility that’s easily accessible from Bangkok’s city center. Using Suvarnabhumi (pronounced su-wanna-poom) is usually pretty smooth.

The same cannot be said from DMK, which I often struggle to believe was Thailand’s primary international gateway, before BKK opened in 2006. Located north of the city in a crowded district accessible by an expressway that’s almost always at a standstill, Don Mueang is one of Asia’s oldest airports—and it shows. In addition to the facilities being worn and tired, delays and red tape are common here, assuming you arrive in time for your flight.

Ways to Compare DMK and BKK

Comparing the locations of Bangkok’s airports is difficult, for two reasons. First, because while both are the same distance from Siam Station (generally regarded as the center of modern Bangkok), not everyone who needs to use them is staying near there. Secondly, since BKK is connected to the city via the Airport Rail Link, the question of traffic is less important, which means that in terms of travel time, it’s arguably closer to (or at least more convenient for) most travelers in the city.

In this category, there’s really no competition between DMK vs BKK. While it’s true that DMK Priority Pass lounges like the Coral Lounge are nothing to shake a stick at, general travelers have little choice but to sit in decrepit gate areas, with concessions that are perfectly fine by Thai standards, but really lacking compared to the global-quality choices at BKK. This is to say nothing of the quality of duty-free shopping at Suvarnabhumi compared to Don Mueang, even if I don’t personally avail either very often.

The vast majority of international airlines that fly to Thailand only fly to Suvarnabhumi. Don Mueang, on the other hand, is primarily served by low-cost airlines, and only by airlines that are either Thai or are based within Southeast Asia. As a general rule, if you are flying from North America, New Zealand or Europe to Thailand, you will arrive at or depart from BKK. From Australia, there is the remote possibility that you may connect through Kuala Lumpur or Singapore on a low-cost airline and arrive at DMK.

In line with this, your decision of whether to choose BKK or DMK will depend less on your prefer and more upon your origin or destination. If you’re bound for certain cities within Thailand, such as smaller cities in Isaan or southern airports like Chumphon or Ranong, Don Mueang will be your only choice. If you’re flying to destinations like Sukhothai or Samui, on the other hand, Suvarnabhumi is the only Bangkok airport from which flights to and from those places operate.

I’ll be honest: The security and immigration set-ups at both of Bangkok’s airports are a hot mess. Don Mueang simply doesn’t have enough checkpoints, which leads to crazy queues. Suvarnabhumi has plenty of staff and space, but the fact that you have to go up one level and then down another level to access security and then go down to immigration represents an unnecessary hassle, to say nothing of how overly scrutinous I’ve found security personnel at BKK to be.

Reasons to Use Don Mueang Airport

I don’t love Don Mueang, but the airport does serve certain purposes. Here are a few of the reasons you might end up using DMK:

Want to make sure difference between DMK and BKK don’t trip you up on your next trip to Thailand? Hire me to plan it!

Other FAQ About Bangkok’s Airports

Are BKK and DMK the same airport?

Which airport in Bangkok is better?

Although BKK is the newer, more convenient and more globally-connected Bangkok airport, DMK is not without its utility. Ultimately, your perception of which Bangkok airport is better will depend upon where you’re flying, how much you want to spend and other factors specific to your trip.

Which Bangkok airport is closer to the city?

DMK airport is technically closer to Bangkok’s city center, with a distance of just 22 km to Siam Station, compared with 28 km for BKK. However, it’s not as simple as this. While you can ride the Airport Rail Link (ARL) from Phaya Thai station to BKK and bypass traffic, the reality is that DMK is actually closer if you’re staying in northern parts of central Bangkok, including near Victory Monument, Chatuchak Market, Lat Phrao and the Rama IX areas.

The BKK vs DMK debate isn’t completely cut-and-dry. While Suvarnabhumi (BKK) is a newer and better-designed facility with superior connections to Bangkok’s city center, Don Mueang (DMK) certainly serves its own purpose. On the other hand, in my personal and professional experience traveling in Thailand, I go out of my way to avoid DMK, for reasons I imagine many of you will relate to if you have to fly out of it. No matter where you next trip to Thailand will take you, consider hiring me to plan it. My custom Thailand itinerary service allows you to focus on enjoying your trip, instead of hashing out tedious details like which Bangkok airport to use.